Martin Hollý’s tenth feature film is SIGNUM LAUDIS, a drama set during the end of WWI. Created as a co-production between the Czech Barrandov Film Studios and Slovak Film Production, the union of these two countries is reflected in the sentiment of the film. Along with a well-known film crew, the cast is also made up of some of the best actors across both the Czech Republic and Slovakia. Hollý directed films across many genres, from fairy-tales to war dramas, crowd pleasers to high brow films, and even excelled in television with the superb BALADA O SIEDMICH OBESENÝCH (1968). SIGNUM LAUDIS is unique in the way that it presents war. Where Czech and Slovak films normally approac war with an inner perspective on humanity through the individual, SIGNUM LAUDIS instead keeps the focus on the war itself, attempting to impress upon the audience its futility and the terror it creates.

SIGNUM LAUDIS starts at the end of WWI with Corporal Hoferik (Müller) and his squad pinned down in trenches by Russian artillery fire and machine guns. Given the mission to hold the trenches and recently coming into command by way of death of his superior officer, Hoferik orders the troops to their bayonets to charge the Russian line. With Hoferik securing the line, he then orders his troops to retreat while he covers them before retreating himself. While the battle is ongoing, military politics are shifting and a new General of Staff, Berger (Prachař), plans his first act as an attempt to humiliate an old schoolmate, current General Gross (Lukavský) of the front lines. He enacts his revenge by issuing the Signum Laudis, a major medal of the Austro-Hungarian Empire only awarded to officers, to Corporal Hoferik for his deeds in the battle early that day. The day after Hoferik receives the medal, their headquarters are bombarded by Russian artillery and they soon begin to retreat, only to be encircled by the Russian army. General Berger orders the regiment to attack the Russians while commanders and a small unit led by Hoferik hide in the woods. The commanders eventually realize their army cannot live up to the idealism that they have seemingly personified in Hoferik, and decide that they must court martial him so they can surrender and save themselves. 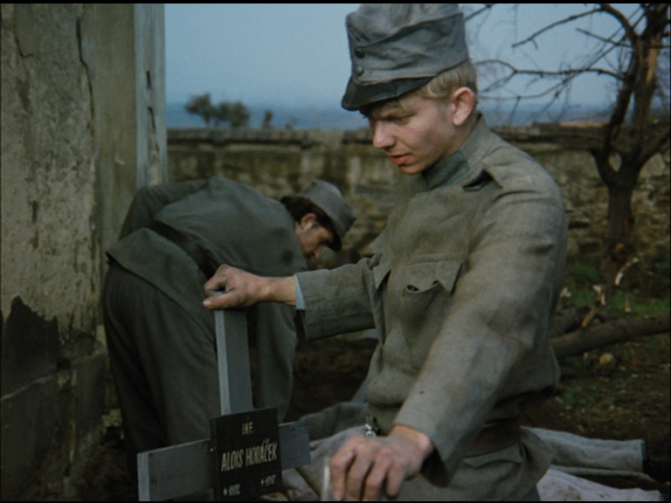 Hollý approaches war in SIGNUM LAUDIS as pointless and mired in disillusionment. The film opens with an over-sensationalized scene of trench warfare, with Hoferik and his troops running through barbed wire and gunfire, comrades dying left and right. When Hoferik retreats back to the original bunker, he encounters a soldier who was too afraid to run, horrified by Hoferik’s suicidal command. Wanting to kill Hoferik but not having the courage, he is knocked unconscious by an artillery shell and then carried to safety on the back of Hoferik himself. After this scene and the main credits, the film shifts in not just light but tone, beginning to take a more serious outlook towards the soldiers’ situation. When Hoferik returns to base, we get another scene showing two fallen soldiers being buried.  As their burial takes place, fellow soldiers question which soldiers are in which grave, and if such questions even matter during wartime.
Hoferik as a character personifies the loyal and obedient soldier, who believes in any order given to him. Constantly stuck between two situations, Hoferik finds himself trying to climb the ladder to join the military elite but at the same time alienating himself from his brothers-in-arms. Hollý expresses this shift in many of Hoferik’s actions, including a scene where he relays his past before the military, a lowly horse dealer who had his license suspended for lying. Hoferik receiving the Sigmund Laudis also shows this shift, as he is court-martialed the next day for the very same actions that won him the award. Historically, the Sigmund Laudis would cease as a medal when the Austro-Hungarian Empire fell at the end of WWI.

SIGNUM LAUDIS uses music as another way to distort reality in many interesting ways. Liška uses a recurring musical motif of a quasi-parade and military style tune that seems playful, but is usually in contrast o the emotion that is played out on screen. An example of this happens early in the film where the tune is played while Hoferik receives his medal, and he experiences flashbacks to his soldiers dying in the battle he is being honored for. Liška also uses a blues harmonic track that is played by a private soldier, stuck to executing orders that risk his life at the safety of his commanders.
As the film concludes, with Hoferik leading his squad of soldiers and the uppper chain of command through the woods, we see his character become the ideal soldier that the commanders would want. Unfortunately, he stops seeing his superiors as his superiors and instead sees them as his own to command. This shows Hollý’s ultimate disillusion, that Hoferik’s superiors are not the same ideal soldier that they impress upon him. Unable to sustain the same combat that he and his squad endure day in and day out, they instead choose to sacrifice Hoferi so they can save themselves.

For some reason Martin Hollý’s films don’t seem to gain any attraction with western viewers, receiving very little international recognition even during the original releases. While many Czech and Slovak films require some sense of historical or geopolitical understanding, SIGNUM LAUDIS touches on themes that are universally understood, the pointless and misleading aspects of war. Hollý is masterful in SIGNUM LAUDIS, striking an even balance between war and philosophical drama. Available by SME in an English friendly, region free, PAL disc.